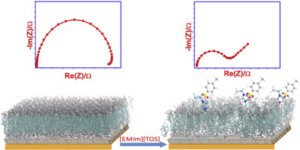 Abstract: In this work formation of a planar phospholipid bilayer of 1,2-dioleoyl-sn-glycero-3-phospho-L-serine on an integrated porous cushion and its interaction with the ionic liquid 1-ethyl-3-methylimidazolium tosylate was studied. The integrated porous cushion was prepared by grafting chitosan covalently on porous 11-mercaptoundecanoic acid self-assembled monolayer on gold. Pores on the self-assembled monolayer were created by partial electro-oxidative desorption of the thiol molecules from the gold surface. Chitosan was grafted on the porous self-assembled monolayer by EDC/NSH activation procedure. Lipid bilayer was formed through solvent exchange method and evidenced with QCM-D, fluorescence microscopy, and electrochemical impedance spectroscopy. A lowering of QCM frequency of 26.41.5 Hz was observed during the bilayer formation. Impedance measurement showed that the lipid bilayer deposited integrated membrane can attain a high electrical resistance of 27 MΩcm2. The said ionic liquid created pores in the bilayer through interaction that was evidenced by significant decrease in charge transfer resistance in the impedance spectra and corroborated with fluorescence imaging. The work has indicated that the ionic liquid 1-ethyl-3-methylimidazolium tosylate can be cytotoxic. The new strategy for the formation of polymer cushion on a porous tether has shown new possibility of studying membrane attack interaction and ion diffusion in lipid bilayers through simple impedance analysis technique.

Elucidating the origin of the electrochemical capacity in proton-based battery... Insights into Redox Reactions and Ionic Transfers in Ni/Fe Layered Double Hydroxide...
Scroll to top
We use cookies to enhance your user experience. If you continue to browse, we consider that you are accepting its use. You can read our cookie policy here.I agreeRead More