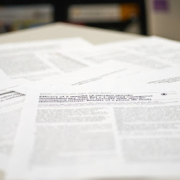 As in the case of the food industry in general, there is a global concern about safety and quality in complex food matrices, such as honey, which is driving the demand for fast, sensitive and affordable analytical techniques across the honey-packaging industry. Although excellent techniques such as liquid chromatography-tandem mass spectrometry (LC-MS/MS) are available, these are located in centralized laboratories and are still lacking in speed, simplicity and cost-effectiveness. Here, a new approach is presented where a competitive immunoassay is combined with a novel High Fundamental Frequency Quartz Crystal Microbalance with Dissipation (HFF-QCMD) array biosensor for the simultaneous detection of antibiotics and pesticides in honey. Concretely, thiabendazole and sulfathiazole residues were monitored in spiked honey samples. Results revealed that HFF-QCMD arrays provide a complementary and reliable tool to LC-MS/MS for the analysis of contaminants in these kinds of complex matrices, while avoiding elaborate sample pre-treatment. The good sensitivity achieved (I50 values in the 70–720 µg/kg range) and the short analysis time (60 min for 24 individual assays), together with the ability for multiple analyte detection (24 sensor array) and its cost-effectiveness, pave the way for the implementation of a fast on-line, in situ routine control of potentially hazardous chemical residues in honey.

You may read the full paper here. 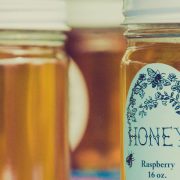 AWSensors technology will be used in a new research project funded by Spanish Government (Retos Investigación 2017-2019) to develop a DNA biosensor for detection of honey adulteration. Honey companies are interested in this biosensor because new and cheaper analytical methods are required to meet the quality controls set by European Comission.

One of the priority challenges of the European Union (EU) is “Quality and Security in Food”. Food adulteration is a topic of interest in several fields: health care, legal (since it is a fraud) and economic (since it generates unfair competition). In this context, honey is one of the most commonly adulterated food, which generates a great deal of economical problems in apiarian production and comercialization sector. This situation affects directly to Spain, since is the most important EU country in honey production and comercialization. Nowadays, honey adulteration is made, mainly, by using vegetal siropes, resulting in an adulterated product similar in taste to natural honey, but fraudulent, and including substances that consumer unknowingly ingests. Therefore, the European Comission is promoting the development of new analytical methods which complement or replace the already existing ones.

The main drawbacks of the already existing techniques are:

DNA biosensors are becoming very promising in the field of security and quality food control, since they are easy handling, reliable, fast and low cost. The proposed technology is based on the use of acoustic sensors coated with functionalized nanostructures which allow to greatly increase the Limit of Detection (LOD) of the DNA of the substances used in honey adulteration.

In this scenario, techniques based on DNA biosensors are becoming very promising in the field of security and quality food control, since they are easy handling, reliable, fast (analysis periods: minutes) and low cost. In this research project, the use of a novel technology in the field of food control adulteration is proposed. This technology is based on the use of acoustic sensors coated with functionalized nanostructures which allow to greatly increase the Limit of Detection (LOD) of the DNA of the plant substances used in honey adulteration. The use of those mentioned nanostructures generates a mechanic-acoustic amplification effect and, moreover, allow to separate the sensor transduction mechanism from the biochemical recognition process (DNA hybridization). The expected result is an increase of more than one order of magnitude in the sensor response when comparing it with the response of a sensor without the nanostructure coating.

The research proposed in this project deals with new challenges:

To deal with these challenges, a multidisciplinary research team of experts in micro and nano electronics, advanced materials and biotechonology is required to guarantee the succes of the project. AWSensors will collaborate with this team of scientists from the Polytechnic University of Valencia, in Spain, (Bioengineering Research and Innovation Center and University Institute of Food Engineering for Development) and University Pierre et Marie Curie, in France (Laboratoire interfaces et systémes electroquimiques). Other honey companies such as Apisol, Honeygreen, Cooperativa Apícola de España, Granalbe and Primo Mendoza are interested in the results of the project.